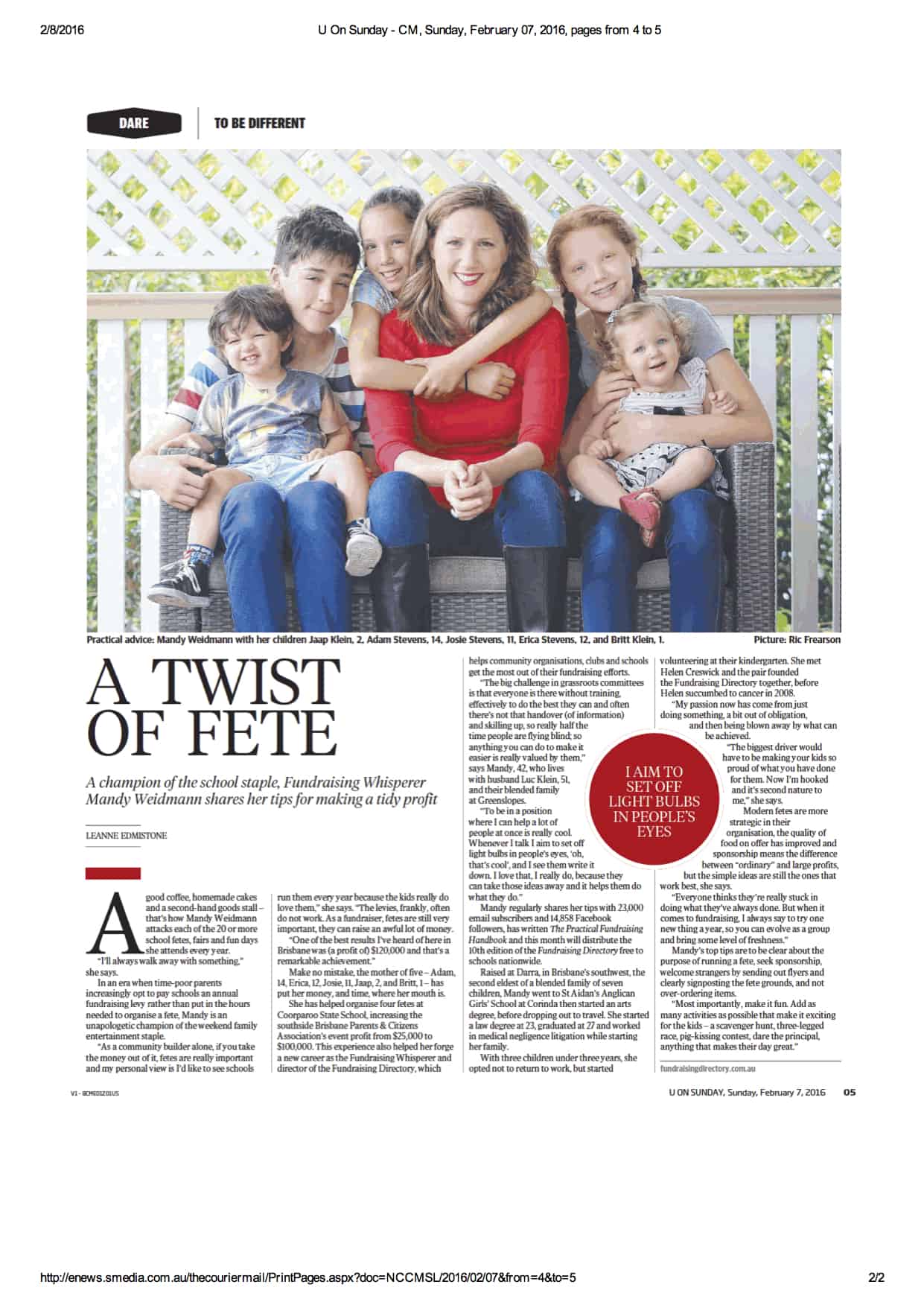 A Twist of Fete

A champion of the school staple, Fundraising Whisperer Mandy Weidmann shares her tips for making a tidy profit.

A good coffee, homemade cakes and a second-hand goods stall – that’s how Mandy Weidmann attacks each of the 20 or more school fetes, fairs and fun days she attends every year. “I’ll always walk away with something,” she says.

In an era when time-poor parents increasingly opt to pay schools an annual fundraising levy rather than put in the hours needed to organise a fete, Mandy is an unapologetic champion of the weekend family entertainment staple.

“As a community builder alone, if you take the money out of it, fetes are really important and my personal view is I’d like to see schools run them every year because the kids really do love them,” she says. “The levies, frankly, often do not work. As a fundraiser, fetes are still very important, they can raise an awful lot of money.

“One of the best results I’ve heard of here in Brisbane was (a profit of ) $120,000 and that’s a remarkable achievement.”

She has helped organise four fetes at Coorparoo State School, increasing the southside Brisbane Parents & Citizens Association’s event profit from $25,000 to $100,000. This experience also helped her forge a new career as the Fundraising Whisperer and director of the Fundraising Directory, which helps community organisation, clubs and schools get the most out of their fundraising efforts.

“The big challenge in grassroots committees is that everyone is there without training, effectively to do the best they can and often there’s not that handover (of information) and skilling up, so really half the time people are flying blind; so anything you can do to make it easier is really valued by them,” says Mandy, 42, who lives with husband Luc Klein, 51, and their blended family at Greenslopes.

“To be in a position where I can help a lot of people at once is really cool. Whenever I talk I aim to set off light bulbs in people’s eyes, ‘oh that’s cool’, and I see them write it down. I love that, I really do, because they can take those ideas away and it helps them do what they do.”

Mandy regularly shares her tips with 23,000 email subscribers and 14, 858 Facebook followers, has written The Practical Fundraising Handbook and this month will distribute the 10th edition of the Fundraising Directory free to schools nationwide.

Raised at Darra, in Brisbane’s southwest, the second eldest of a blended family of seven children, Mandy went to St Aidan’s Anglican Girls’ School at Corinda then started an arts degree, before dropping out to travel. She started a law degree at 23, graduated at 27 and worked in medical negligence litigation while starting her family.

With three children under three years, she opted not to return to work but started volunteering at their kindergarten. She met Helen Creswick and the pair founded the Fundraising Directory together before Helen succumbed to cancer in 2008.

“My passion now has come from just doing something, a bit out of obligation, and then being blown away by what can be achieved.

“The biggest driver would have to be making your kids so proud of what you have done for them. Now I’m hooked and it’s second nature to me,” she says.

Modern fetes are more strategic in their organisation, the quality of food on offer has improved and sponsorship means the difference between ‘ordinary’ and large profits, but the simple ideas are still the ones that work best, she says.

“Everyone thinks they’re really stuck in doing what they’ve always done. But when it comes to fundraising, I always say to try one new thing a year, so you can evolve as a group and bring some level of freshness.”

Mandy’s top tips are to be clear about the purpose of running a fete, seek sponsorship, welcome strangers by sending out flyers and clearly signposting the fete grounds, and not over-ordering items.

“Most importantly, make it fun. Add as many activities as possible that make it exciting for the kids – a scavenger hunt, three-legged race, pig-kissing contest, dare the principal, anything that makes their day great.”