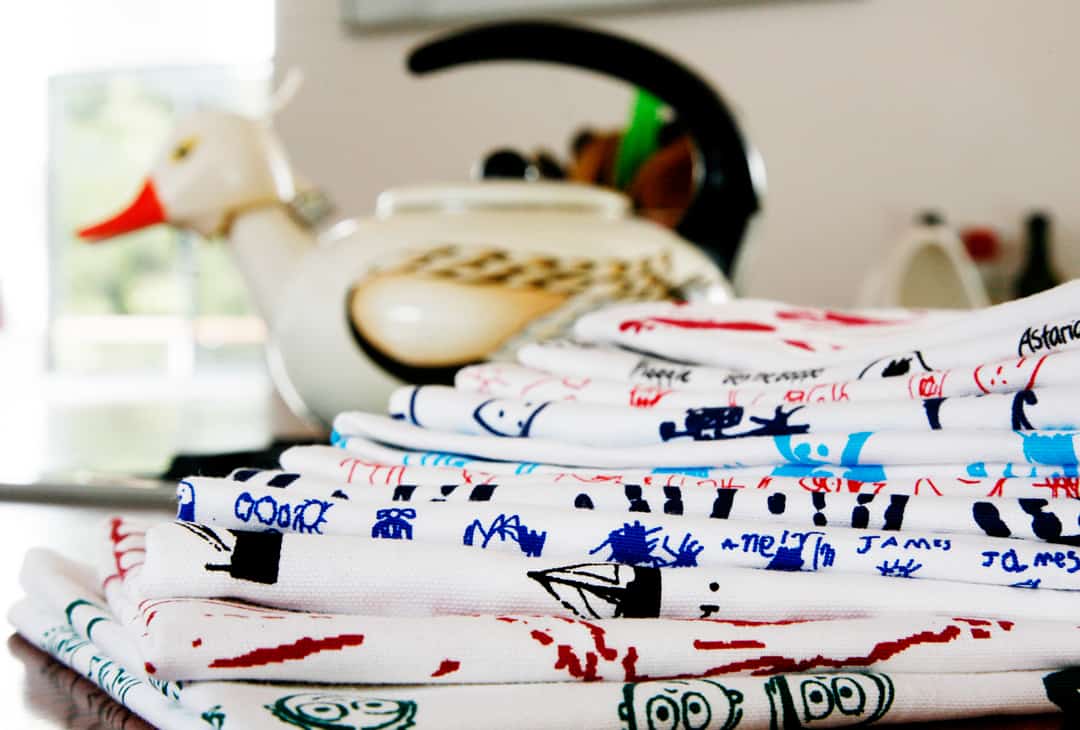 When household budgets are being tightened, successful fundraisers know to choose items for a product drive that are practical and likely to be needed anyway; the premise being that you change where the money is spent to your advantage. Tea towels are a perfect example of ‘austerity’ fundraising because they are practical—most households will use at least one, once a day—and affordable.

But tea towels as fundraisers are so much more and they work well beyond the cutesy kindergarten handprint.

Emma Glynn from Expressions, which has been producing quality printed tea towels for fundraising since 1999, says that as well as being a popular early childcare fundraising choice, tea towels work well for:

Turning a tea towel into a keepsake
Schools often get their tea towels printed with self-portraits drawn by the students of the school for that year.

Sports clubs regularly get their club logo and the names of players for the season printed, creating a roll of honour.

Tea towels are popular as commemorative items particularly with church groups and community groups that are celebrating significant milestones.

Here’s another example: the Queensland Country Women’s Association produces a tea towel annually for its ‘country of study’. It bears the QCWA logo and year, the name of the country and images that reflect that land.

Tip
Keepsakes are not generally used. So buy extra: for example, one to use daily and smile at now; and one to keep pristine, to bring the memories back in years to come without food stains.

How successful are tea towels as a fundraiser?
Emma Glynn says Expressions has helped groups across Australia raise millions of dollars over the years, with many clients coming back year after year. Why the success? “Because it’s a quality product that lasts long after the initial purchase,” she says.

“Tea towels are an affordable everyday item that we all need and use, so the people ordering often want several, not only to use at homes but as gifts and keepsakes. They’re inexpensive, easy to post and make an enduring memento—so they sell well!”

How much to sell your tea towel for?
Expressions’ Emma Glynn suggests a mark-up of $3 to $6 per item on the base cost.

As a Mother’s Day gift
Tea Towels make a great Mothers Day gift.  Students could also make a computer generated “I OWE YOU” drying up vouchers to accompany the present.

To request an information kit from Expressions, click HERE