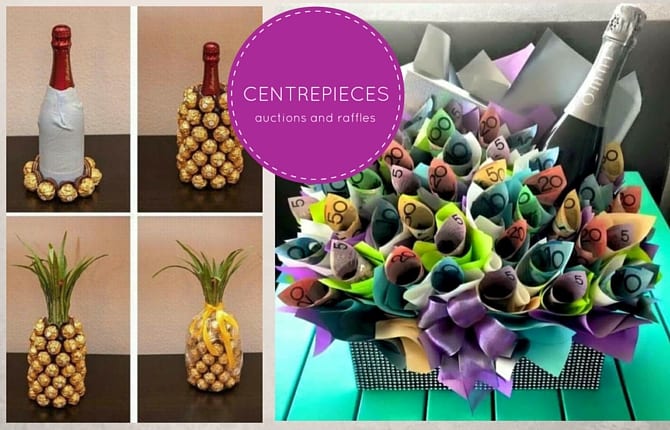 Centrepieces to Raffle or Auction

Centrepieces not only add some flair to an event, they can also provide an opportunity to raise a bit of extra money.

One of the benefits of a statement centrepiece is that it is good for large or small fundraisers. It can suit anyone from an individual running a small trivia night to raise money for a fundraising event, right up to a gala ball fundraiser.

There are plenty of amazing ideas for centrepieces that people want to win. You can get creative and add a bit of sparkle into your centrepieces. See the photo above for the ‘money hamper’ idea – how breathtaking! (note: this one is not wise to sit on a table for obvious reasons – but you can take it around at an event to sell tickets).

The general idea is that you hold a mini auction within each table to sell the centrepiece. Anything with chocolate will work well – the possibilities are limited only by your imagination, just like the pineapple centrepiece above! Hint: If it’s chocolate, wrap it in plastic and be sure to tell everyone in no uncertain terms to not destroy your prizes!

It doesn’t have to take place at the end of the event – it can be done early on, with the prize simply ear-marked for the winner. They may even share the spoils throughout the event!

Here’s another one from Bouquet-it (so creative!) that would make a good centrepiece (or silent auction prize) at a high-end event. Note: Only put them on the table (wrapped in plastic!) at the time of the mini auction. 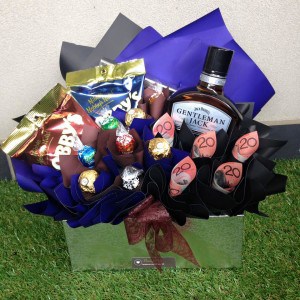 *Photo credit: Bouquet-it for the money hamper and Pinterest for the pineapple.